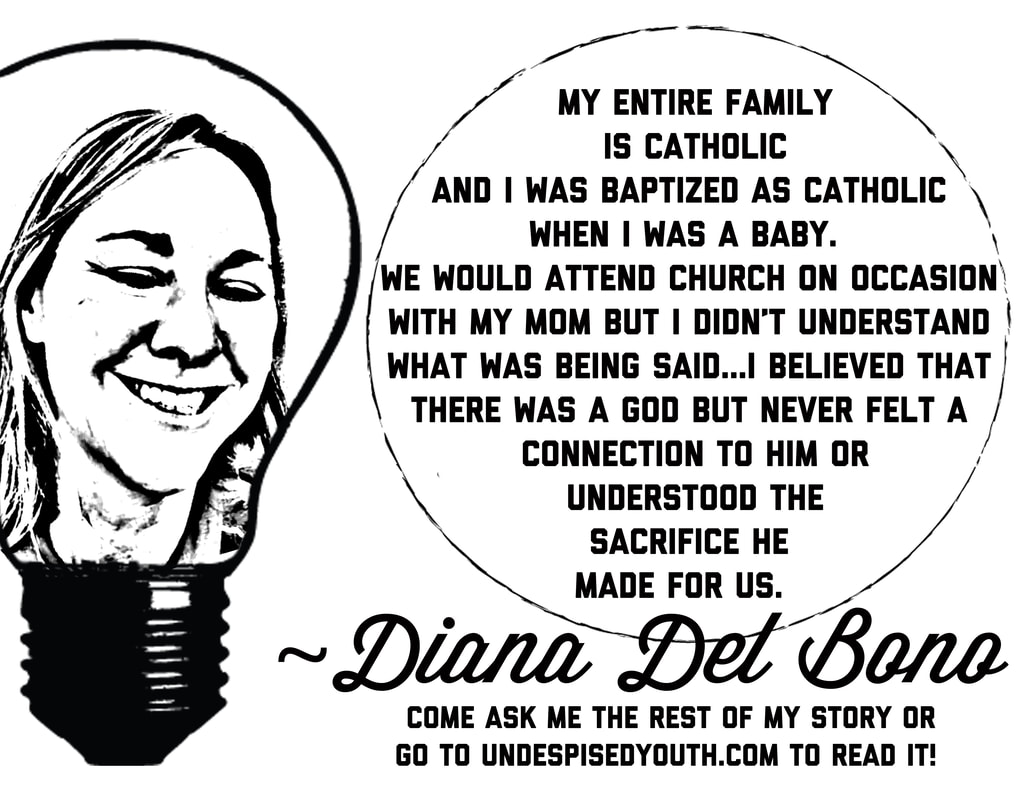 I grew up in a typical home with my parents and my older brother in Northern California.  My grandma would live with us when she was not working in the grape fields.  My Dad worked to support the family and my mom stayed home to take care of my brother and I.  However, my mom did go to work when we got older.  We moved to Southern California when I was in 6th grade and moved again to North County in the 10th grade.
My entire family is Catholic and I was baptized as Catholic when I was a baby.  We would attend church on occasion with my mom but I didn’t understand what was being said or why we had to sit and kneel so often.   I also went through Catechism classes and went through my 1st Communion.  I believed that there was a God but never felt a connection to Him or understood the sacrifice He made for us.   As I got older I went to Church on occasion with a friend of mine.  She was also Catholic.  Again, I went but never really felt a connection or understood or know the Bible at all.  I continued to try and grow in my faith as a Catholic because after all, my entire family is Catholic and that is what we did.
While growing up, I was a “good” girl.  I did well in school, I hung out with my friends in Middle School. I ran Cross Country and Track in High School.  I dated a little in High School and after High School before meeting my now husband.  One of the many things I liked about him was that he and his family were also Catholics.  I thought, oh good, our families will like that!  We dated on and off for 10 years before we got married.  We had a typical Catholic Mass wedding and a great reception.
We lived in Borrego after we got married and started our family shortly after.  We had our children, 3 girls, baptized after they were born.  When our oldest was about 5 years old I enrolled her in the Catholic classes and I attended the Catholic church on occasion.  I had a hard time getting to church as I just didn’t feel committed to going.  I eventually stopped taking our oldest to class and stopped going to church as again, I didn’t understand what was being said and felt like I was just going through the motions of what was expected at mass.
It wasn’t long after my decision to stop going to the Catholic Church that I met a lady in our local grocery store.  She had a little girl the same age as mine.  We said “hi” and smiled in greeting and went our own ways.  Well, we seemed to be on the same schedule because we kept meeting each other at the store on the same day and time for weeks.  We eventually formed a friendship and decided to have playdates for our girls.  The girls had a great time and I was thankful to have formed a friendship with someone as sweet as she.  During our friendship we discovered that we knew some of the same people, small towns are like that. I also found out that her husband was the Pastor of the Christian church.  She had invited me to attend and I told her that I had a friend that went to the Christian Center but I was Catholic.  She said that it didn’t matter that I was Catholic.  Eventually I took her up on her offer and went.  I was very nervous the Sunday that I went because I didn’t know what to expect. During the service, I was very touched by the music and during the teaching I thought it was so cool that we actually opened the Bible and read directly from it.
From then on, I continued going to the Christian Center.  I didn’t go often but eventually I did.  I was realizing that I was actually learning the Bible and was so excited about that.  I wanted my kids to grow up knowing the Bible stories that I never learned.  I eventually started forming friendships and was so grateful to all the ladies that helped me start my walk with Jesus.  My husband didn’t go to Church with me often, but when he did he realized he enjoyed it as well.  One day after Church he told me he was going to ask the Pastor about getting baptized.  I told him I was thinking about the same thing.  Well, we got baptized and the feeling I had during the baptism was of peace.  I felt at peace knowing I know where I will be going after I leave this earthly life.  I felt at peace knowing I was on the right path.
The day that I gave my life to Christ was a great day.  I can’t say it has been an easy journey though.  Being a young Christian, I was definitely put through many, many trials.  I am put through many trials still, but what I have learned throughout the years is that Jesus is always by my side.  The blessings we have received from Him are numerous and I am humbled by his goodness.  I am so thankful for the patience and guidance He has given me.
A verse that has helped me through many trials is from Philippians 4:6 “Be anxious for nothing, but in everything by prayer and supplication, with thanksgiving, let your requests be make know to God.”