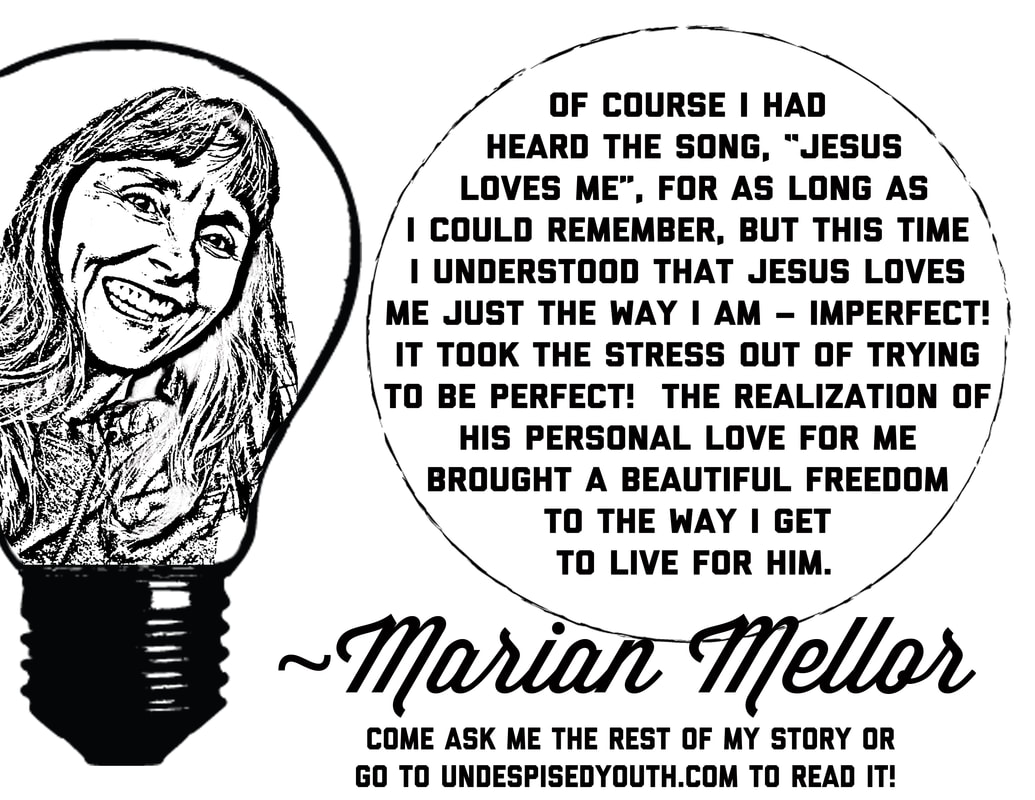 I grew up in a home with my mom, dad and my brother who is 3 years younger than I am. We went to church nearly every Sunday and I don’t remember ever not knowing Jesus, definitely trusting Him with a childlike faith.

I remember sitting in church at about 5 years of age, praying and asking God to give me a monkey and a giraffe. LOL! I thought I heard God tell me that they would be in my closet when I got home – they weren’t!! ;)  As an adult I told my grandmother about that prayer and for one of my birthdays she gave me a stuffed monkey and a giraffe pin. J

Because of a simple comparison between report cards when I was in First Grade (my grades were worse than my friend’s), I became a perfectionist, striving to get straight A’s. I didn’t want to make mistakes and I was incredibly embarrassed when I did make them.

When I was about 11 years old, after coming home from church camp, I remember standing in front of the mirror in my bedroom and asking the Lord to make me perfect from then on. I felt I had sinned more than enough for one person’s life and I didn’t want to sin anymore. Little did I know that I would continue to sin and sin and sin and sin!!!!

I went to youth group as a teen and found that I really enjoyed learning more about the Bible. I was pretty much a goody-two-shoes, following rules and trying not to get into trouble (most of the time).

After high school I got a Registered Nursing degree, hoping to go into mission work in Africa. Before going to Africa, however, I was part of a Christian drama ministry called Covenant Players (CP) for 3 years. While I was in CP, I had the opportunity to perform at a retreat in which the main speaker played a recording of a story that changed my life by illustrating Jesus’ love for me personally:

Two young men, Tom and Brad, were best friends and they were serving in the military together during an armed conflict. One day as they were resting in their tent a grenade was thrown in and Tom jumped on it and absorbed the blast (similar to what Captain America did in  “Captain America: The First Avenger”, only that grenade didn’t go off). When the conflict was over, Brad went to Tom’s mom and looked after her from then on.
One time when Brad visited Tom’s mom he asked her if she thought that Tom really loved him. She said to him, “Look at what my son did for you. He died for you. Can you really ask if he loved you? Of course he loved you.”

That story touched my heart VERY deeply as I realized better than ever before that Jesus loves ME so much that He died for ME – Marian.  Of course I had heard the song, “Jesus Loves Me”, for as long as I could remember, but this time I understood that Jesus loves me just the way I am – imperfect! It took the stress out of trying to be perfect!  The realization of His personal love for me brought a beautiful freedom to the way I get to live for Him. Now instead of trying to be perfect, I simply try to bless His heart because He loves me for me – not because I am perfect or do things really well – I’m not and I don’t!!

Ephesians 3:20-21 says, “Now to Him who is able to do exceedingly abundantly above all that we ask or think, according to the power that works in us, to Him be glory in the church by Christ Jesus to all generations, forever and ever. Amen.” These have become my “life verses”, as I have seen the Lord do so much more in my life than I ever thought was possible and I am exceedingly grateful for His gracious gifts.
Powered by